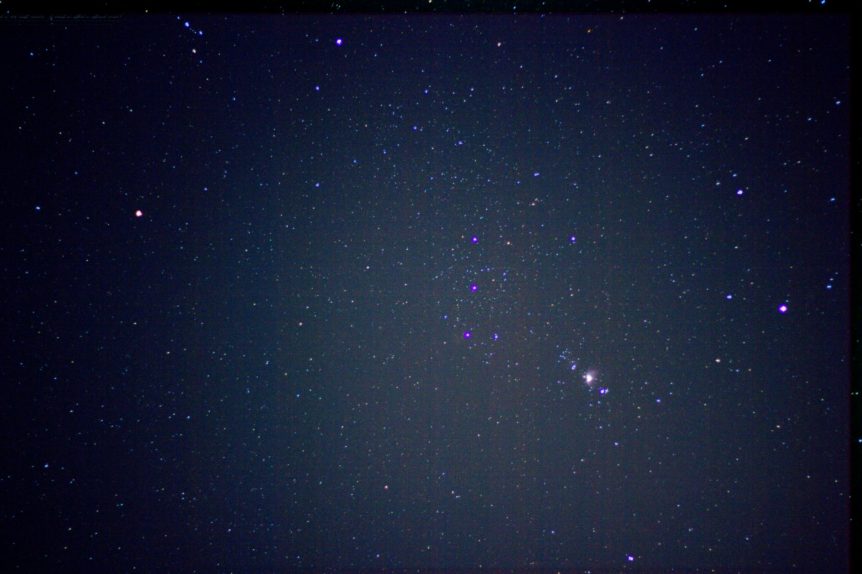 Image Credit: Brianne Nguyen c/o 2014. One of our first star images of Orion and the iconic nebula.

In the fall of 2013, I was looking to develop projects in the fields of space and planetary science. My practice had been lagging. I had done several project iterations over the previous two years that hadn’t inspired me. What had been inspiring to me was the camping trips I was running with about a half dozen students in an unofficial school club. Every month or so, we would head out to the desert and mountain regions around San Diego to have an evening of camping and hiking. My five year old son was always part of these excursions, and I would often find myself heading to bed soon after sunset while the small group stayed awake around a campfire. About a half year into these trips, I awoke late one night to find the group perched on a ridgeline taking long exposure photographs of the stars. I was stunned. They were out doing work while I was sleeping. Not just that, it was beautiful and challenging work that required them to understand the finer points of photography and photo processing.

That trip changed my practice. I no longer wanted to spend time talking about the cosmos in class. We could get out and do art to experience it. So I set about learning from the students in our group how to do night photography. And yet, I wanted more for my science class ivfpwvm. That something manifested itself the following spring after a Socratic Seminar discussing panspermia with a group of 9th graders. They wanted to know if it was possible for them to access space in high school. Could they launch something into orbit? We did some research and found out we could launch a weather balloon to the stratosphere – approximately twenty miles above the earth and retrieve it. We were all in, and in that moment we were creating the ideas that would become Blue Dot Education.

Over the course of the spring 2014 semester, I had two groups work on developing a plan for and scheduling the launch of weather balloons with GoPros attached. Simultaneously, we had our first telescope donated to our burgeoning astronomy group. The engagement and excitement were palpable as we began taking those first photographs of space, with the possibility of photographing earth’s curvature on the horizon. After one failed launch attempt, we were finally able to successfully get a balloon up and recover it in June of 2014. The students created this short film to document the process. It contains all the elements of a rich, deep learning experience. The students in that class rose to the challenge and set a balloon to the heavens to photograph our pale blue dot against the blackness of space.