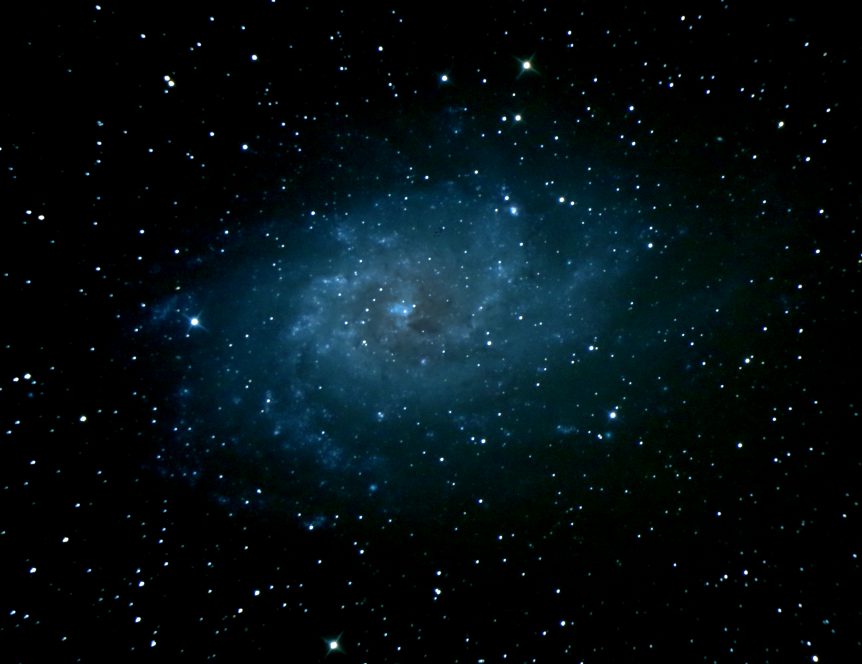 Triangulum Galaxy, or M33, is in the “Local” group of galaxies. This group includes the Milky Way and Andromeda. Triangulum Galaxy is the smallest of the group, but it is 50,000 light-years across (half the diameter of the Milky Way), which is not “small” in any respect! Triangulum Galaxy is 3 million light-years away from us which is relatively nearby compared to other galaxies. Interestingly, Andromeda is very close to the Triangulum Galaxy, at approximately 2.5 million light-years away. Like Andromeda, some say it can be seen with the naked eye, however, the sky must be very dark. This photo was taken in Culp Valley, CA, during an astrophotography trip last semester. During this time, M33 was in the perfect spot in the sky for a photo! The camera, a Canon, was placed in the telescope’s eyepiece and a series of multiple exposures were captured. When we returned from the trip, I developed the image using a program called Deep Sky Stacker. The purpose of developing the photo was to bring out the beautiful colors and swirls hidden in the galaxy. When a photo is taken in the field, with no effects, it usually comes out a bit colorless and needs to be enhanced. The process of developing the image took a while because the program needs to use a combination of all-white images, all-black images, and faint images of the galaxy. This is to layer the photos and add more depth. It took me a long time to sort through the different exposures, but when they were imported into Deep Sky Stacker the result was incredible! I felt like I had a little piece of space in my computer screen!