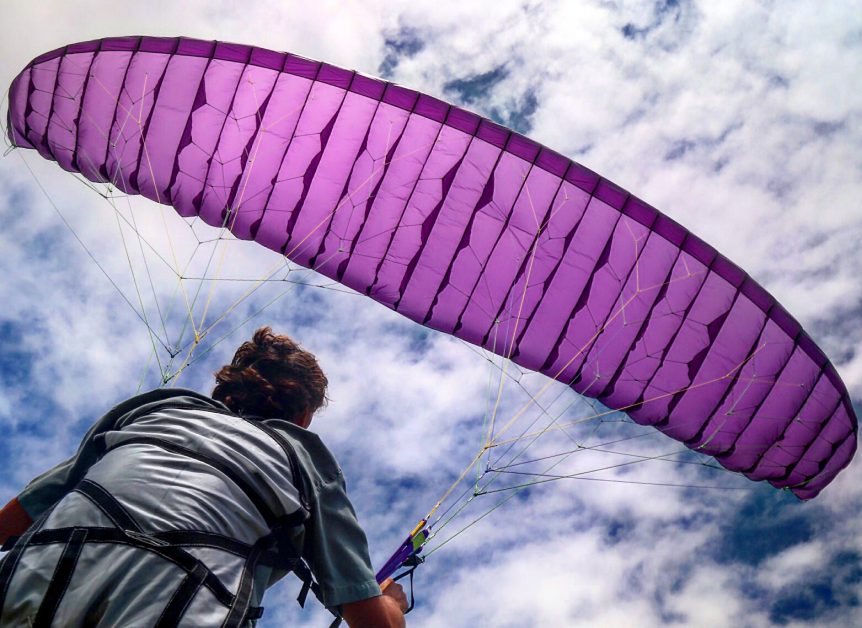 In the spring of spring of 2016, I had a project in mind that I thought would be a huge shift in the world of project based learning. I had the chance to teach seniors that semester, and I’d always had the conceit that young adults on the verge of heading out in the world could use experience in the world while still connected to some type of mentorship. Thus was born the Meaning of Life Project – a chance for second semester seniors to get out in the world and explore. One senior had his own plans for taking the work to an entire new level.

My idea was for students to document the meaning they found in life through photography. A young man in class named Deryk Goerke came to me a week or so into the semester requesting a modified curriculum. Deryk had found plans online for how to construct a paraglider. Deryk’s lifelong dream had been to fly. He had taken a few classes toward his pilot’s license, but this project could be the culmination of that work. If it had been most other students, I would have pushed them to doing the regular coursework. However, Deryk was a young man I’d worked with as a freshman. He wrestled with whether to stay in school. Even at that point, I saw a skilled craftsperson. I had also seen him work independently with success. As a sophomore in Andrew Lerario’s class, he ground a telescope lens. I thought he just might be able to pull off something he could test on flat ground, so I worked to get him approved with various administrators and clearing his workload.

Deryk spent the entire semester planning, designing, constructing, testing, and ultimately finishing a prototype for a paraglider. Deryk documented the work on his class blog. In it he shows a glimpse of the hundreds of hours of work he put into learning how to make a flying machine.

I was concerned when Deryk finished the build work because I realized the true learning, the real adventure was just about to begin. He did a few tests on flat ground right around graduation. After graduation, he moved on to sand dune flights in the deserts east of San Diego. He finally tested the glider on a local hill called Little black

After his first few flights with his glider, the wear and tear on the materials made Deryk realize he’d need to move on to a more robust model. With the help of a Blue Dot Education Learning Grant, Deryk was able to purchase his own glider. He has since taken up the sport with the same vigor he once approached gymnastics.

I was able to catch up with Deryk this past spring break, in March of 2019. We got the chance to go back to Little Black to film him flying one more time. It’s a joy to watch someone who has made an adventure of their learning and who is doing something they love. This style of learning and doing is exactly what Blue Dot Education strives for. Deryk has led the way in developing our culture from early on. He continues to inspire all of us and break new ground as a college student.